The present work concerns local fracture analysis approaches for quasi-brittle heterogeneous materials based on the Embedded Finite Element Method (E-FEM). A framework that successfully considers all fracture modes and their associated triaxial stress states simultaneously is proposed in a mathematically and physically consistent fashion. The objective is the modelling of a rich variety of tridimensional fracture processes at the mesoscale in complex materials, such as concrete.A detailed mathematical analysis work is done on the variational foundations of current E-FEM approaches for the simulation of local fractures and material heterogeneities. These insights help to identify theoretical faults and pathologies that have prevented the framework to reach a fully functional generalisation.A set of mathematical developments is carried on afterwards to consolidate a new E-FEM model proposal. First, the embedded strong discontinuity model handling the most important features of fracture mode generalisation is addressed. Then, the work continues with the integration of a weak discontinuity model, which deals with the representation of material heterogeneities within a single element. All previous works on E-FEM applications on heterogeneous materials, having single fracture mode approaches at the heart of their structure, are taken as a departure point for this process. Ideas coming from recent E-FEM works done on homogeneous materials and large scale mixed fracture mode analyses in two dimensions are integrated in this work as well.Eventually, the entire numerical implementation of this theoretical framework is done, achieving an optimal compromise between the prediction capability of the model and program efficiency. This final integrated generalisation is tested in a variety of settingsand compared to other approaches for highlighting its most basic features and potentials. A set of validations are first carried out with the simulation of a classical mixed fracture mode test setup for homogeneous materials. The study of heterogeneous tridimensional fracture processes is then started with simulations having a regular material inclusion within a uniform material matrix. Finally, the generalised model is used to simulate concrete samples considering realistic material heterogeneity distributions coming from real test samples. A concluding discussion is held on the overall value of this model and forthcoming applications.

Impact of meso-scale heterogeneities on the mechanical behaviour of concrete: insights from in-situ x-ray tomography and E-FEM modelling

This doctoral thesis investigates the impact of the meso-scale heterogeneities of concrete (aggregates and macro-pores) on its macroscopic mechanical response. A combined numerical and experimental approach is adopted to study the progressive evolution of the 3D fracturing processes of micro-concrete specimens under uniaxial tension, uniaxial compression and triaxial compression. Part of the originality of this work lies in the exploration of multiple loading paths on concrete samples of realistic composition (including cement, sand, aggregates and water) and in the in-situ nature of the experiments conducted. The experimental campaign is performed inside an x-ray scanner, which allows the internal structure of the material to be non-destructively captured and its evolution from the intact (before loading) until the damaged (after unloading) state to be followed and quantified. The 3D images coming from the x-ray scans are first analysed in order to quantitatively describe the morphology of the meso-structure (aggregates, mortar matrix and macro-pores). A timeseries analysis of the set of 3D images coming from each in-situ test follows, in order to measure the 3D kinematic fields (displacement and strain fields) throughout the experiments. On the numerical side, the identified morphologies coming from the intact x-rays scans are given as an input to a FE meso-model with enhanced discontinuities. The originality of the numerical simulations comes from their 3D nature and the consideration of the actual meso-structure of the micro-concrete specimens, based on the segmentation of the three phases of the material. After a calibration of the model in uniaxial tension, its predictive ability is challenged under different stress paths in compression. An extensive comparison is presented between experimental and numerical observations, in terms of macroscopic responses, displacement fields, fracturing processes and failure patterns. The typical asymmetric behaviour of concrete in tension and compression, as well as the increase of strength and ductility with the increase of confinement are sufficiently captured numerically. Starting from an x-ray scan, it is shown that the model is able to satisfactorily reproduce some of the basic characteristic features of the failure modes observed experimentally for the different loading paths studied. While validating the numerical results and through a combination of numerical and experimental observations, the significant impact of the meso-scale heterogeneities on the local failure mechanisms is revealed. It is shown that, for the studied material, the shape and location of the largest aggregates and macro-pores are essentially driving the fracture patterns under simple tension, simple compression and triaxial compression. The predictive ability of the model strongly suggests that the explicit representation of these heterogeneities is the key feature that allows this predictive power. A further insight into the impact of the meso-structure is obtained by investigating virtual concrete morphologies, generated by modifying the real meso-structures coming from the x-ray scans.

We present in this work a Finite Element based model, which is devoted to describing failure mechanics of quasi-brittle materials and identifying the minimum necessary ingredients for the fatigue behaviors. The material will be studied at meso-scale, and be considered as heterogeneous media. The model is formulated in a sound framework of the Enhanced Finite Element Method (EFEM). As internal enhancements, two kinds of discontinuities are performed. On the one hand, strong discontinuities aim to illustrate cracks and fractures. On the other hand, weak discontinuities are used to describe heterogeneities. In addition to the initiations and propagations of cracks, the closure of cracks is also taken into account. As a first step of validation, the proposed model is applied to reproduce the mechanical responses of heterogeneous material by adding the closure mechanism to the mode-I and mode-II strong discontinuity. We show the ability of the model to simulate some of the main characteristics of such materials, for instance, the emerged asymmetric traction/compression behavior, the stiffness recovery, the plastic deformation, and the hysteresis phenomenon. Further, we compare the simulation results to experimental ones. The studied concrete material is composed of a matrix of cement and aggregates. By applying the same formulations and loadings, the proposed model succeeds in reproducing the macroscopic responses for monotonic and cyclic compression tests. Finally, the model is also tested by comparing with the experimental data in triaxial loadings.

The use of the Embedded Finite Element Method is used for the numerical modelling of triaxial fracture processes in non-homogeneous quasi-brittle materials. Weak and strong discontinuities are used, allowing the model to account for material heterogeneities and represent local fractures. Simulations are compared to Digital Volume Correlation performed on X-Rays tomographic images for various confinement pressures.
--

Software for Practical Analysis of Materials 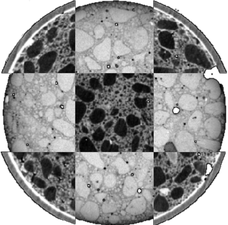 This is a Python package for handling and correlating 3D fields for applications in material science. SPAM has evolved to cover needs of data analysis from 3D x-ray tomography work and correlated random fields with mechanical applications.
--

We propose an analytical model to predict the critical probability of percolation. It is based on the excursion set theory which allows us to consider N-dimensional bounded regions. Details are given for the three-dimensional (3D) case and statistically representative volume elements are calculated. Finally, generalization to the N-dimensional case is made.
-- 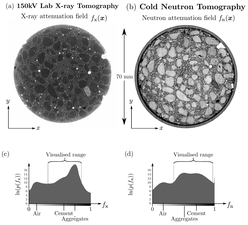 Both x-ray and neutron tomography give very detailed insight in the microstructure of concrete. However, their different contrasts make one modality more relevant for some features. Both types of images acquired on the same specimen may be registered onto each other, after the statistical joint distribution of absorption coefficients has been learned. A Gaussian mixture model is used to identify up to five different phases having different signatures.
-- 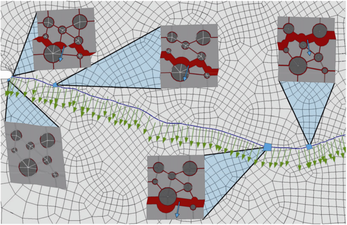 The work proposes a FE2 multiscale approach to computational modeling of material failure in concrete-like structures, made of cement/aggregate-type composite materials. Keeping the approach in a classical homogenization setting, a multiscale model is proposed, which naturally provides a microscopic lengthscale to be exported to the macrostructure. There, this length scale is used as regularization parameter in the context of the Continuum Strong Discontinuity Approach to material failure (CSDA).
-- 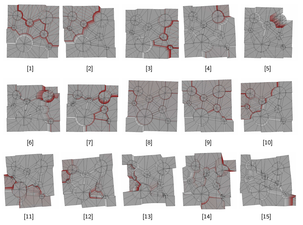 The reduced order part of the work addresses the problematic of reducing the computational time of multi-scale framework by solving, at each point of the structural scale, the Representative Volume Element (RVE) equilibrium problem using Reduce-Basis approximations. A specific methodology is proposed in order to tackle non-smooth fields.
--

Software for Practical Analysis of Materials